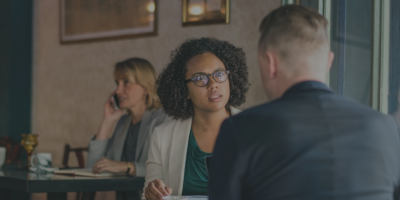 You’re waiting for your candidate to arrive, you’ve already looked through their CV and although you have a few individuals to interview today, this particular CV stands out, you think they have potential.  You have your questions at the ready. They walk in, they appear to stumble over themselves, you notice their shirt tail is hanging out and they proceed to give you a nervous handshake. You as the interviewer may look at this candidate as clumsy, scruffy and lacking in confidence and in this early negative judgement, may write them off as unworthy of your role. But, what if the candidate isn’t clumsy and has a completely different view on what happened? They may blame the floor or the new shoes they bought for the occasion to make a lasting impression, the shirt tail came out as they tripped and their adrenaline kicked in causing the shaky handshake. Should you judge that candidate based on that one act?

Impression accuracy varies depending on the observer and the target (person, object, scene, etc.) being observed. Within the first 6 seconds of eye contact with your potential new employee you have used your cognitive biases to form a flash judgement about that interviewee relating to their presumed personality and competence, just as they have about you as the interviewer.

Despite this, these snap judgments you make about an interviewee may or may not be accurate, but they still exist. And if the judgment made is a negative one, the difficulty in shifting your opinion is extremely high, although this is when we would encourage you to try and not write them off before you have even listened to what they have to say.

But, what subconsciously do we look for in those 6 first seconds that make us make that snap judgement?

These subconscious judgements you make can sometimes be the right one, the interviewee may not be right for your company. As recruitment specialists, we quite regularly find that our first initial judgement has been incorrect.

How do you avoid this?

Middletons Assured Talent is a specialist IT and business change recruitment organisation. We deliver contract and permanent recruitment resources to companies across the UK with a particular focus around Yorkshire and Northern England.